Planning a holiday is EASY when you have been there before & know what you want to see & do.

If you don't have local knowledge, it can be HARD :( That's why I created my Travel Planning Cheat Sheets

Want to plan an AWESOME holiday? Get BEST help?

This guide to the beaches of the Gold Coast, Queensland, Australia is an attempt to do justice to something that truly has to be seen to be believed.

As well as giving an overview of each of the main 21 beaches, you will also be directed to other resources that will help you choose which of the beaches you would like to visit.

But firstly and most importantly we need to name those main beaches.

Starting in the north and working our way south... 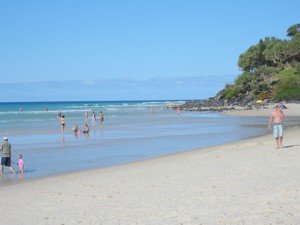 Coolangatta Beach one the most family friendly
of Gold Coast Beaches 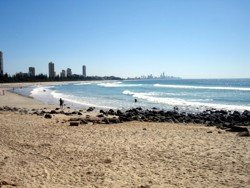 And sneaking over the border into northern NSW (which I haven't counted as Gold Coast beaches, but perhaps I should) we have: 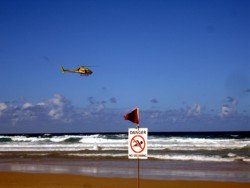 Surf can be dangerous.
Swim between the flags.

Most of the Gold Coast beaches have surf patrols with swimming areas between the flags which operate in the main areas year round and in the less popular spots during the main summer season.

The beaches are patrolled by a combination of professional surf life savers and a very large number of volunteers.

Beachlife, nippers and surf life saving are a huge part of the culture of the Gold Coast.

Most weekends from October through to about April you will see many of the nippers going through their paces on the beaches up and down the coast and later in the season you will see them in competitions.

If you have an opportunity, you can support them by eating in the Surf Life Saving Clubs or making donations when you see them around with yellow tins.

You never know when you might need their services, so I really recommend you drop a couple of coins in a tin or enjoy a meal at one of the great SLSCs up and down the coast.

You are bound to get a great view, awesome atmosphere and the food is pretty good in some of them too!

There are many different beaches on the Goldie and I love most of them, however, I do have a few of my personal favourites. So check out my fave Gold Coast beaches and why I like them so much...

Coolangatta - Rainbow Beach and Coolangatta's Greenmount beaches rate as my favourites for families. There is often shelter from the prevailing winds, and at low tides there is an almost lagoon which is fabulous for the little kids to enjoy splashing around. In the summer this lagoon is amazingly warm and I can sit in it for ages just floating around! Just love this beach and it is great to spend the day there with the great easy restaurants and cafes under Reflections on the Sea on Marine Parade, just a short stroll away. 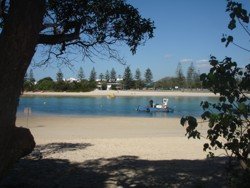 Tallebudgera Creek Beach - another little gem, it is actually a small beach along the creek and again affords some protection from prevailing winds.

Tallebudgera isn't a very big beach, and you do have to beware of the currents in the creek, but still great for families.

If you are really lucky you may even see dolphins either at the mouth of the estuary or swimming up the creek. That is something special!

Labrador - Harley's Lagoon - is not an ocean beach so no surf here, but again a great beach for the family. Kids can play in the lagoon, enjoy fish and chips from Harley's Sea Food and watch the Pelican Feeding in the middle of the day. Great playgrounds along the beachfront too.

Burleigh Beach - is popular with surfers because of the point break around the head as well as families. Unlike the vast expanse of sand you see at Surfers Paradise, this beach is can offer some protection from prevailing winds at times and has rocky outcrops around the headland which can be fun spots for families to explore. Obviously, extreme care must be taken when walking around the rocks, but I remember as a child loving finding sea life and beach life in rockpools and crevices. 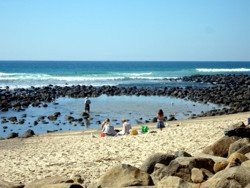 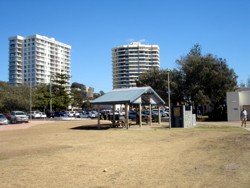 And it isn't just me... from Gold Coast Council website...

One of the world’s leading travel websites, tripadvisor.com, has announced its top 10 beaches in Australia, with four of them right here on the Gold Coast.

Burleigh Heads was rated as the number one beach in Australia, thanks to its ideal surfing conditions, village atmosphere and fantastic views.

Chair of Economic Development and Tourism Committee, Councillor Susie Douglas, said the locations in the 2012 Travellers Choice Awards were all nominated by travellers.

“This simply reaffirms what 11 million visitors to the Gold Coast every year already know - that we have some of the most beautiful beaches in the world.”

One visitor to Burleigh Heads summed up its qualities on tripadvisor.com saying, “this beach is unforgettable. Safe swimming, clean sand, loved by board riders. The treed esplanade is perfect for strolling, lay back and read, let the kids play in the lovely playgrounds, have a BBQ at the many gas BBQs, take a walk through the headland...something for everyone every day of the year. Sheer bliss.”

Cr Douglas said the choice of Burleigh Heads as number one would not come as a surprise to locals.

“As well as being the location for some of Australia’s best pro-surfing competitions, Burleigh is a favourite holiday destination for families,” said Cr Douglas.

“Coolangatta came in at number three, with two of the world’s best surf breaks and easy access to family-friendly facilities.”

“Broadbeach rated highly due to its two patrolled areas and nearby pedestrian shopping and café precinct. Parents can take the kids to the amazing Kurrawa all-abilities children’s playground,” said Cr Douglas.

Surfers Paradise was voted number seven by travellers, with one visitor commenting on tripadvisor.com, “Careful if you go for a run along the beach, it is endless!! Clean sand, clean water, patrolled swimming areas, just across the road from cafes. ALL GOOD! Take me back there.”

Have your say about what you just read! Leave me a comment in the box below.

Planning A Holiday Should Be FUN!
I've lived in & around Gold Coast since 2004. I'm here to help. Use this website to get all the information you need to plan your perfect Gold Coast holiday, or simply click here to find out more about my planning cheat sheets, tips & and tools to make it easier!
Annie

About GC in December

About GC in January